1.2. Scratch Off Prizes Are NOT Random

1.How To Win At Lottery Scratch Offs

When most people think of opportunities to make advantageous gambles, scratch off lottery tickets aren’t usually considered. Everyone knows that Blackjack can be beaten with card counting, poker is a game of skill, and there’s ways to improve one’s odds at many other types of wagers.

But I’ve always thought outside the box and I want to show you how you can sometimes turn the odds in your favor when it comes to scratch offs.

It boils down to three primary tasks.

This is the step that every gambler needs to know, regardless of what game you’re playing.

Most scratch off tickets print their “odds” of winning. But a scratch offs odds only tell part of the story. The odds tell you how likely you are to get a winning ticket, but it doesn’t take into consideration the value of that win.

To get a single number that represents both the odds and the value of a scratch off, you need to look at “expected value”.

Expected Value can be thought of as the average payback of a game. If you spend $100 on a game with an expected value of 65%, then you can expect your average winnings to be $65 (a $35 loss).

It’s calculated by adding up the chance of each outcome multiplied by the result of the outcome.

Most scratch off tickets have an expected value of somewhere between 65% and 85%. It’s typically lower for lower denomination tickets, like the $1 and $2 tickets, and higher for the higher denomination tickets, like the $10 and $20 games. This is a notoriously low return. Even penny slot machines have returns that are commonly above 85%. But unlike slot machines, the odds of a scratch off lottery ticket change over time, and with that change comes opportunities to win at scratch offs.

Here’s a simple coin flip example for how to calculate the expected value of a game. It costs $10 to play this imaginary coin flip game. If the coin is heads, you get back $19 for a gain of $9. If it’s tails, you lose the $10 you wagered.

The same calculation can be performed for scratch off lottery tickets.

If your goal is to win the most (or lose the least) money, then you should compare each game and only play games that have the highest expected value. 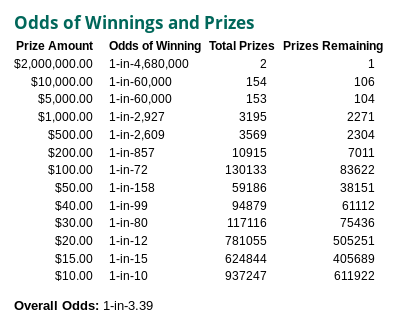 You can basically perform the same calculation that we used for the coin flip example and find the expected value of that game. There is one small difference that we need to account for. The table doesn’t show how many losing tickets remain. To determine that, we have to use some deduction.

Next, we’ll need to perform one more calculation to estimate the number of remaining losers. Since there are almost 1,000,000 $10 prizes in that table, it’s probably safe to assume the percentage of $10 tickets sold accurately represents the percentage of tickets sold overall. That’s a safe assumption thanks to the law of large numbers converging on accurate averages.

We can also calculate the total number of remaining tickets by multiplying the number of starting tickets by the percent sold, or 9,360,000 * 0.65 = 6,084,000, or about 6 million. Now we have all of the information to create our table just like we did for the coin flip.

If you do the math for the image above, should get around 75.27% expected value for the remaining prizes. If you do the math using the total prizes, you can get the expected value at the start of the game, which you’ll notice is about 75.98%. That slight decrease in the expected value comes because there should be 1 grand prize every ~4,680,000 tickets, but one of them has already been claimed. That means that as the game stands at the time of this writing, there were 6,084,000 tickets remaining and only one grand prize. So the odds of hitting that big jackpot are worse now than at the start of the game. As the game progresses, the odds may improve. A year from now there might only be 600,000 tickets remaining with a grand prize still in there somewhere!

Needless to say, this is a long and tedious calculation to do by hand. I’ll cover that in the third step to beating the lottery, patience. Luckily there are websites that calculate the scratch off odds for some games if you happen to live in one of the states that publish remaining prize data.

1.2.  Scratch Off Prizes Are NOT Random

Since this is such a bold claim, I’ll lead off with the proof.

Here is a picture of the procurement document that the Massachusetts lottery commission provided for ticket printers to bid on. It states that the grand prizes cannot be truly random. They must be distributed evenly throughout all tickets of a game.

This may come as a surprise, but the organizations that run scratch offs are not in the business of ensuring randomness. They are more like a marketing and sales company than a casino.

They want to ensure that the tickets they print sell completely. They don’t want to sign a contract to design and print a game with 20 million tickets and then only sell 1 million when people quit playing the game. That would result in a lot of wasted time and money.

The way lottery organizations get around these issues is by distributing grand prizes “randomly” throughout the game in what’s known as a “stratified random distribution”.

That means they split (or “stratify”) the game evenly into “pools” based on the number of grand prizes. If there are 3 grand prizes, they’ll split the tickets into 3 pools of an equal number of tickets. Then they will randomly place a single grand prize into each pool. In this way, it appears the game is still “random” and can’t be exploited. But that’s not exactly the case!

This is a soft skill that’s more difficult to measure than the previous two, but it might be the most important. The benefit of patience goes beyond just lotteries. Ask any professional poker player how important patience is while they sit for hours passing hand after hand, just waiting for cards that are decent enough to play. Blackjack card counters also patiently sit through deck after deck waiting for the number of remaining high cards to shift to their favor. And players seeking an advantage in the lottery are going to have to wait for the prize pool to get just right.

Here’s a real-world example to demonstrate how long you might have to wait for a scratch off game to become worth playing.

Now, most people have more than 1 option available when it comes to scratch offs. But with multiple options, you don’t have to be as patient waiting for a single game to become profitable. But then the patience turns towards patiently sifting through multiple games and doing the tedious calculations and analysis to determine profitability.

In my quest to learn how to win at scratch offs, I’ve put a lot of time and effort into writing software to automatically read data from state lotteries each day and perform expected value calculations. I’ve also read a lot of legal contracts and procurement agreements between lottery organizations and ticket printers. The steps outlined here are backed by that experience.

And this is my conclusion:

Contrary to popular belief, it is possible to win at scratch offs. At the very least, if you’re going to play for the fun of it regardless of whether or not you can win, then you might as well make sure you’re losing the least by playing the best games. The lottery isn’t the “idiot tax” as it’s commonly referred; not for someone willing to think outside the box, perform a few math calculations, read some fine print, and have a little patience.

Where Can You Gamble Legally Online In The US?

How to Beat Roulette with a Roulette Computer