You’d be hard-pressed to find a card game requiring the nuanced understanding and strategizing that poker does. Every player has their style, depending on the poker game they’re playing. Playing with different players makes every game distinct from the others.

And now that there are countless live poker games online, everybody can get in on the action. In addition, online poker accommodates all budgets, meaning beginners can start small and build their bankroll as they learn the game’s complexities.

This article is a beginner’s guide to poker and online poker betting, providing everything you need to know to get into this beautiful game.

When it comes to card games, poker is unique because skill factors in much more than luck. The basic rules and concepts are relatively easy to grasp. However, mastering the game and all its intricacies can be a lifelong endeavor. Every time you sit down to play poker, this brings a unique challenge, a variable you won’t get from playing something like online slots.

Because of its popularity, you can always find a table to play in, with several variants and formats to choose from. And unlike other casino games, there’s no built-in house edge. Your skill level often dictates your winnings, allowing you to beat lady luck consistently enough. And if you still prefer the vibe of online casino games, video poker mixes poker and slots, allowing you to experience the best of both gaming worlds.

Real-money online poker was finally legalized in the US in 2013, at least in certain forms. Online poker is legal in Nevada, Delaware, New Jersey, and Pennsylvania, with bills passed declaring poker’s legality. Meanwhile, online poker is illegal in Utah, Hawaii, Tennessee, Alaska, New Hampshire, and Georgia. For its part, live poker remains cast in a peculiar grey area, where it is simply “not illegal” in certain states.

For example, tribal casinos have special gambling concessions. This means live poker games in tribal casinos can be more accessible than online poker in most US territories.

To get started on your poker journey, you need to grasp hand rankings. In poker, the player with the best hand wins the pot. The poker hand combinations in ascending order include the following:

These hand combinations are the basis for most poker games, regardless of variation.

There can be an abundance of poker games depending on which site you use. Below are the three primary poker games you’ll find. 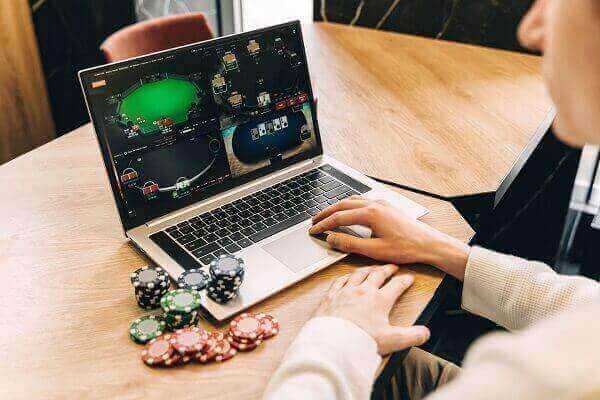 As the most popular poker variation, it’s also the most accessible, with most online gaming platforms offering a bevy of Texas hold ’em tables. Each player is dealt two cards face down in this game, which kicks off the initial round of betting.

A small and a big blind must be placed by the two participants sitting on the dealer’s right side. For example, a USD$1 for the small blind and USD$2 for the big blind–with the latter always being double the former. These forced bets guarantees that there will always be chips in play. The blinds can be set for the entire game or increased after a set number of hands.

After the initial betting round, the dealer lays out three face-up cards on the table. This is called the flop. Players can draw combinations from the cards laid on the table and the ones they hold. The flop initiates another betting round, starting with the player next to the big blind.

Unlike the first round of betting, where players need to match the big blind or the raise, players can “check,” which means staying in the game without adding more chips to the pot. Should anyone place a bet, players will need to match it to proceed.

After the flop, the dealer “burns” the top card on the deck (laying it face down to the side) before laying another card face up, known as the flop. This increases the number of cards players can draw combinations from and initiates another betting round.

Finally, the dealer burns another card before laying the final card face up on the table, known as the “river.” This kicks off the final round of betting. If multiple players are still in the game after the final betting round, the highest hand combination wins the pot. Conversely, a player can also place a bet without anyone calling it. In that case, the unmatched bettor takes the pot.

In this variation of Texas hold ’em, the dealer hands players four-hole cards instead of two. Players can combine any two of the four cards dealt to them with the community cards to make the best five-card combination possible. As you can see, this poker variation gives players two more cards to work with compared to Texas hold ’em.

Also known as three-card poker, players only need to make a hand combination from three cards (4 hearts, 5 clubs, and 6 spades make a straight). Unlike the previous two variations, players are competing against the dealer. The game starts by placing an initial bet called the “ante.” Players are dealt three cards face up, which they can choose to play or fold. Playing requires adding a bet to the ante.

As you might surmise, high cards frequently win hands in three-card poker. In addition, a straight beats a flush in this type of poker. Higher combinations get bonus payouts. For example, some sites offer a 5:1 payout for a mini royal (same-suited Q, K, and A). Players can also place two side bets: pair plus (as high as 100:1 payout) and six-card bonus (a massive payout of 1,000:1).

The proliferation of gaming sites has resulted in the availability of various tournaments and real-money poker games online. The most common formats you’ll find include the following:

Once you scope online poker sites, you’ll see plenty of variations of the formats above. There are also games where you compete against the dealer instead of the other players.

It bears repeating that for non-professionals, a lifetime may not be enough to master poker. However, if you practice the concepts below, you can build the necessary skill to profit from playing online poker. You might even unknowingly beat a pro in the process.

As a beginner, playing with as many hands as possible can be tempting. After all, what’s the point of playing if you’re just going to watch others play? However, poker doesn’t follow this logic. Patience is a big part of a winning strategy in this game.

When you’re just starting out, practice passing on marginal hands and jumping on massive hands. This approach can entail raising when you’re the last to act, filtering out players with marginal hands, or winning the pot outright when everyone folds.

High pairs (A-A, Q-Q) and high-suited connectors (suited A-K, K-Q) are hands you typically raise. And while there’s value in raising these kinds of hands when you’re first to act, they can be a compelling move when acting last.

As you get more experience, you can get a feel for when to raise smaller pairs and suited connectors. But before you get to that stage, it’s best to be selective.

Defending your blinds has become standard play in Texas hold ’em poker. Two primary factors justifying this strategy are your commitment to the enforced bet and being the last to act pre-flop. When you’re last to act, you can get a lot of information on your opponents’ strategies. When you’ve played long enough, you can get a sense of who’s limping into the next round of betting and who’s merely trying to steal the pot.

However, this isn’t an end-all, be-all strategy. You should still consider other factors, such as how many players are still in the hand and if someone raised.

This puts math in the equation, which immediately complicates things a bit more. To start with, “outs” refer to the number of cards in the deck that can make your hand. For example, if you have a flush draw (meaning you have four suited cards), that leaves nine more cards from that suit in the deck to get the flush. Basically, you can have outs for multiple hands. For example, apart from a flush draw, you can also have a straight flush draw and a straight draw.

It’s an advanced skill to look at the board and know the odds of getting your hand. There are also poker odds charts online that you can review. But as a beginner, simply understanding how many outs you have can help determine whether you should play or fold your hand. As you gain experience, you’ll know whether a specific bet is worth the number of outs left.

There are appropriate times to play aggressively, depending on the type of poker game. For example, when you’re playing in a tournament, the opportunities for aggressive play might be scarce. Conversely, you can play aggressively for extended periods in a cash game, particularly if you have most of the chips on the table.

You can use an aggressive front when you sense that the table is tight and players tend to fold easily. Depending on how much momentum you’ve gained, you can even be aggressive with small pairs and connectors. When you get a good feel for when to turn on the aggressiveness, it can be a powerful weapon to yield on the table.

Aggressive play entails a good amount of bluffing. There will be plenty of times when you’ll miss out on your draws. As such, knowing when to bluff can help you steal pots even when you miss hands.

Making a continuation bet is an excellent strategy for stealing pots. For example, when you bet pre-flop, you can play as though you hit your hand by placing a continuation bet. This move can also work in disguising made hands, as players can think you’re only looking to steal a pot when you already have a strong hand.

Knowing when to let go of a hand is a valuable poker skill that the best online players possess. There will be plenty of times when you think you need to stick with a hand because of the amount you’ve already bet. But unless you’re 100% sure you have the best hand, there are times when you should cut your losses and walk away from the hand.

This refers to intelligently allocating the percentage of your bankroll to play with. For example, if you’re only starting with USD$100, it would be best to start with blinds of USD$0.05 or USD$0.10 for cash games. This allows you to reserve cash for rebuys. A good rule of thumb for tournaments is to spend 5% to 10% of your bankroll for a single entry.

Quickly jumping on tables with larger blinds or entry fees is a great way to lose money fast.

As eloquently put by American poker player Robert Williamson III, “Poker takes a day to learn and a lifetime to master.” This makes the game so intriguing for millions of players worldwide and is the reason for Hollywood’s ongoing fascination with poker. The fun and excitement always lead to a unique experience, whether it’s a friendly home game with friends or a high-stakes round of online poker on your mobile device.

As long as you keep in mind that it’s just a game and you don’t need to lose your mind and your finances to pursue mastery of it, poker can be an excellent hobby to pick up.

Top 10 Most Popular Torrent Websites to Look for in 2023