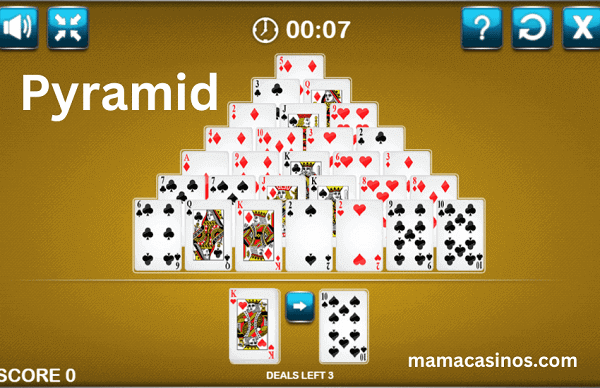 Now you have the opportunity to experience Egypt’s pyramids and pharaohs without ever leaving your sofa at home. Pyramid: Quest for Immortality is a typical NetEnt slot in that it is completed in every way. Both design and gameplay are interesting and out of the ordinary, and in particular it is the fun avalanche function that makes this slot extra exciting. The layout itself is also a new silhouette compared to what you are used to from the traditional 5-3 machines, and this helps to make the whole experience even better. Pyramid is a game that we believe is suitable for the vast majority of people, especially if you are already a fan of NetEnt’s innovation.

Unlike many of the most common slot machines, Pyramid is not built with five reels and three rows. Here, instead, you have five individual reels with 3, 4, 5, 4 and 3 rows on each reel, which together create a pyramid structure also on the playing area itself. This fun setup is unlike what we are used to, but it brings a whole new dimension when it comes to gameplay. In addition, you have a whopping 720 paylines to choose from, which means that you have great opportunities to adapt your game exactly as you wish.

When it comes to betting, you can choose to bet between bet levels from 1 to 10, where there are 20 coins at each level. Coin values ​​range from 0.01 to 2 euros. This gives great variation, and you can choose between very small or very large stakes. In total, you have the opportunity to win a whopping 3,600,000 coins at Pyramid!

As the name also suggests, this slot machine is based on Egypt’s pyramids and the story surrounding Egyptian mythology. This is reflected in symbols taken directly from Egyptian hieroglyphs. Here you find both papyrus-style letters and more typical symbols such as one scarab, one cobra and one ankh as a wild symbol. The background is also great and complete, with the gods Horus and Anubis in gold framing the reels. Cleopatra and Tutankhamun are also both represented on the reels, and in the speakers you have a relatively dramatic drum-based music that sounds like it could have come from The Mummy or Indiana Jones. All in all, this is incredibly well done down to the smallest detail, and the theme also works very well together with the avalanche function that many may recognize from Gonzo’s Quest.

The Avalanche feature is not basically a bonus feature, but it offers more benefits than the regular spinning reels. By “avalanche” is meant that symbols fall on top of each other instead of spinning, and that winning symbols explode and disappear to make way for new falling symbols. This gives more winning chances per “spin” than what you get in a traditional slot machine.

The Wild symbols in Pyramid are there to give you higher chances of winning. These can take the value of any of the other symbols so you can win as much as possible. Wilds are only available on reels 2, 3 and 4. If you get a winning combination that includes the top symbols on these reels, these will automatically be converted into wilds for the next spin. If they win again, they remain wilds for another spin.

The Avalanche feature also comes with a multiplier, and this will increase by x1 every time you get three wins in a row. In total, you can get up to x10. With these functions related to avalanche and wilds, it is not as sad that Pyramid does not have its own bonus round or extra game.

NetEnt delivers once again with its Pyramid: Quest for Immortality slot. The Avalanche function is something NetEnt has clearly put a lot of work into developing, and they have become incredibly good at implementing it exactly where it fits best. This feature helps to underpin the overall Egyptian theme, and not least it makes the game itself many notches more exciting! The machine also has a large variety when it comes to possible stakes, and you can easily choose whether you want to play for small money or whether you really want to bet hard. With a total potential prize pool of 3,600,000 coins, there really isn’t much going down when it comes to Pyramid. 720 paylines can be a bit difficult to keep track of, but once you get started with the game it’s a breeze. We recommend Pyramid:

How is Sports Betting Regulated in the UK?