5 Biggest Casino Robberies of all Time 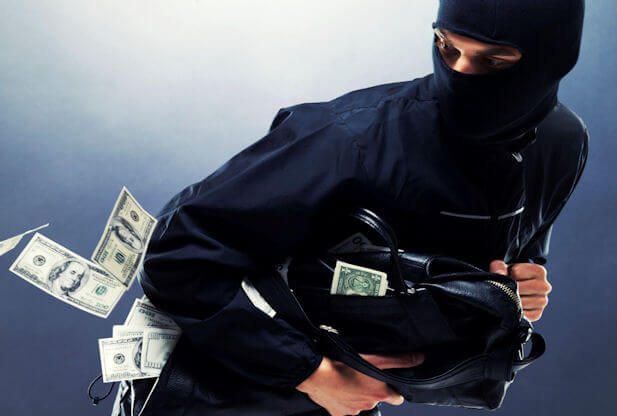 The saying the house always wins might be true to some. But for the following bandits, not only did they beat the house but they also walked away with millions of dollars. Find out how they did it, how many got caught and how many escaped never to be found again.

The Biker Bandit: Robbed $1.5 million from the Bellagio Hotel

In 2010, a man who always dreamed of beating the casino in a craps’ table walked into the Bellagio hotel with his bike’s helmet on and a gun hidden under his sleeves. He didn’t have plans to play craps, though.

Instead, he approached the craps table; pulled his gun and ordered everyone to move. He then stacked $1000 and $25000 chips into his bag until it was full. A few weeks later, Tony Carleo, decide to auction off the chips online.

Unfortunately, the chips were traceable so authorities simply need a photo to identify them. Carleo provided the photo police officers needed when he attempted to sell his loot online. He was arrested and charged with robbing both the Bellagio and Suncoast casinos. He was sentenced to 9-27 years in jail.

Read more: What can we expect from Online Casinos in India in 2020?

The court also ordered the then 30-year-old to pay back $18,000 to the Suncoast casino. But for the Bellagio case, police never recovered about $793,000 worth of chips.

Can cocaine make you rob a casino? Apparently, it can, at least if you are Rolando Ramos, a drug addict with hallucinations of becoming an overnight millionaire. In 2007, Ramos claimed to have taken such a high amount of drugs that the only thing he could think of was to rob off his employer.

So, how did he do it if he was as high as a kite? He disabled crucial cameras and followed the directions of his companion Eric Aguilera. The duo then kidnapped their fellow employees; pepper-sprayed them and deceived security experts to lead them to the casino vault.

Read more: The casino games with the lowest house edge

For better or for worse, the duo got arrested and all the cash they had stolen was recovered. Worse, Ramos didn’t live his dream of topping Ocean’s 11’s heist of $150 million. If only he had thought of beating casinos the legal way!

At most online casinos, you can win up to £20 million playing progressive jackpots. If not that much, you could win thousands of pounds playing video slots and table games. What’s more, some casinos give you no deposit bonuses so that you get started without spending your own cash.

What can you do with a laser, cell phone and a computer? For two Serbian men and a Hungarian woman, those are all you need to rob the prestigious Ritz Club Casino in London. As proof, the trio carried out their heist in 2004 and succeeded, at least for a few days.

The trio targeted roulette wheels and used lasers scanned inside cell phones and connected to a separate computer to detect where roulette balls would land. The trick worked and they won £1.2 million at the casino.

They got paid £300,000 in cash and received a check to cash in the remaining amount afterwards. Luckily for the casino’s operators, they reviewed the players’ tapes and detected their laser. They alerted police and all their money was recovered.

Imagine this. You are a driver tasked to carry a casino’s $2.95 million. An idea hits you and you drive away with the money. You then flee town with your boyfriend and spend the cash for ten years. Would you ever turn yourself in?

That’s what Heather Tallchief, a 21-year-old woman who worked for Circus; Circus did in 2005, twelve years after she robbed her former employer. Unsurprisingly, Tallchief’s boyfriend, the ex-felon who masterminded the crime is still at large to this day.

On the flip side, Tallchief only got five years in jail and later inspired a movie. She no lucky feels guilty now that she’s already served time. But she could have avoided the entire problem had she remained a faithful employer or at least tried gambling legally.

In this day and age, you can find a great gambling site at online casinos 24 and grab welcome bonuses without leaving your house. It’s free money casinos allow you to use to maximize your profits. You can use it to play slots, jackpots, blackjack or poker. If you win more cash, you can cash it out and drive with it to wherever you want with zero regrets at all.

The plan was there. A deal to share the loot had been agreed upon. But somehow, the perfect crime at Crown Casino, Australia never materialized. As reports show, an employee of the casino had agreed to feed a high-roller with the information he could use to win large sums of money.

The plan worked for some hours and the high roller won consistently to the tune of $32 million. But as you’d expect, the casino got suspicious and investigated the cameras. They discovered the employee, fired him and chased away his scammer high roller partner.

Surprisingly, the casino chose not to report the matter to the police. As such, both the employee and the high roller walked away without facing prosecution.

In 2014, an employee of Dore Holdings allegedly stole between $39 and $258 million of high-roller gamblers from Macau. Dore facilitates a junket system in which companies can lend money to VIP gamblers at the Wynn Casino.

Read more: 3 things to know before you play casino for real money

Dore also operates multiple VIP tables at the same casino. So, when the company got robbed and froze investors’ money; activities in Wynn Casino’s VIP section dropped by over 70%. To be clear, Wynn Casino didn’t lose the money. But its most valued customers did.

Despite that, the fraud’s aftermath trickled down on Wynn Macau, Las Vegas Sands, Melco Crown Entertainment and SJM Holdings. All these casinos lost revenues and points in the stocks markets and, albeit temporarily.