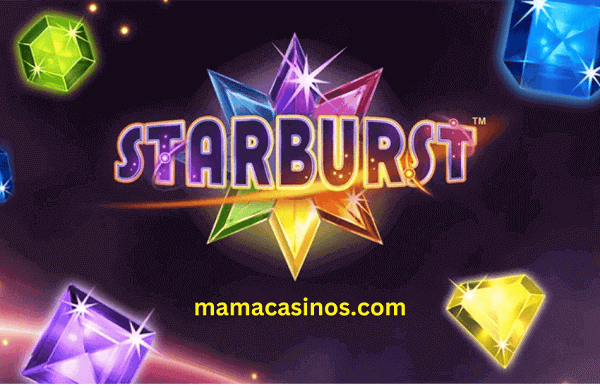 NetEnt is one of the largest game providers on the market today. They deliver award-winning and highly popular slots time and time again. So expectations are often sky high when they launch a new game. Starburst is provided by NetEnt and has quickly become very popular. So popular is this game that the vast majority of casinos use this game as a draw to attract new players. So they offer new players free spins on Starburst as an important part of the welcome bonus.

Starburst has 4 reels with 3 rows. 10 winning lines/bet lines cross these rows and winnings are paid both from right to left and left to right. This gives even greater chances of winning. The theoretical repayment percentage is 96.1%. This puts this machine in the low-risk category. Such slot machines give the player a lot of entertainment for the money and even if the biggest wins are not in the millions, they are relatively generous in relation to the number of wins they pay out.

The minimum bet, with 10 paylines, is 1 kroner. This is a decent start, but the unique thing about Starburst is that you can bet very high sums. This is more than usual. The maximum bet per round is NOK 1,000. Then you must have a solid economy and, not least, a large gambling budget.

Starburst does not have a progressive jackpot or a jackpot in the million range. The largest single win is 50,000 coins, corresponding to the bet. A solid win in a solid game. This win is probably the reason why the game is still so popular, even though it has been more than three years since the game was launched. Therefore, this game is one of the games that any self-respecting casino has in its portfolio.

The technological development has been enormous and this has made it possible for game developers to play with colors, dynamic characters and much more. Some choose to include extra functions and dynamic elements, while others go in other directions.

Starburst represents a solution where the developer has put a lot of work into creating fantastic graphics and less focus on adding extra functions. The design is inspired by the arcade games that were so popular in the 80s and 90s. They have also included elements from crowd favorites such as Candy Crush Saga and the like: Find three of a kind and watch the symbols fall down. Like this type of game, Starburst has nice, neon-inspired symbols and a bright, retro music track. Presumably this is an important reason why the game has become so popular, especially since the game is so well adapted to the mobile platform.

The game works just as well on iPad and iPhone as on Google’s Android system. Thus, players can pull out their mobile phone, connect and play anywhere. The game has also received platinum status, a status that only the very best slot machines get.

Surprisingly, Starburst does not have its own bonus game. NetEnt has been known to include many extra features and exciting bonuses, so the lack of this caused more than one game reviewer to frown when the game was first launched. The regular player surprised reviewers by clutching the game to his chest.

There is an additional feature in Starburst. This is the relatively modest but at the same time exciting wild symbol feature. Here we are talking about a shooting star of a wild symbol. This symbol can only appear on reels 2, 3 and 4. They appear completely randomly and it can be just a single symbol, a pair or three symbols. Wild symbols always bring something positive, but in this game something a little extra has been added. This is an expanding wild symbol. It expands to cover the entire reel and will then replace all the symbols on the reel. In addition, the player receives a free spin. The reel with the wild symbol will remain stationary, but the other reels are re-spinned to give the player an extra chance.

This is a fun game that can give good payouts if you are lucky.

Starburst was launched in 2015 and received almost no mentions on casino websites in the beginning. It seemed a bit too simple and special, and many people missed bonus games. But after the game launched and was made available to players, reviewers were surprised. The players loved the game’s design and especially that it was available on mobile. This game continues to attract new players and many casinos use this game as a draw to attract new players. Getting free spins on Starburst is relatively common and sought after.

Gamble on These Top Benefits of SEO Strategies for Your Casino